A Chair for My Mother / Un sillón para mi mama, Vera B. Williams. (K – 1).
After a fire destroys their home and possessions, Rosa, her mother, and grandmother save and save until they can afford to buy one big, comfortable chair that all three of them can enjoy. English and Spanish editions.

The Circuit / Cajas de carton, Francisco Jimenez. (5 and up). Independent but intertwined stories follow the family through their circuit, from picking cotton and strawberries to topping carrots. With faith, hope, and back-breaking work, the family endures. Autobiographical. English and Spanish editions. 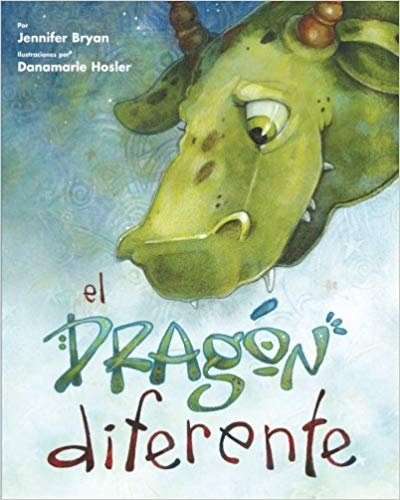 The Day You Begin / El día en que descubres quién eres. Jacqueline Woodson. (K – 3) Follows a series of students who feel like they stand out and are teased by their classmates. Woodson reminds us that we all feel like outsiders sometimes—and how brave it is that we go forth anyway. English and Spanish editions

The Different Dragon / El Dragón diferente, Jennifer Bryan. (Pre-K – 1)
In a bedtime story with one of his moms, Noah goes on a adventure to meet a dragon that is tired of being tough. English and Spanish editions.

Hairs / Pelitos, Sandra Cisneros. (Pre-K – 1).
A young girl describes how each person in the family has hair that looks and acts different. The paintings reflect the diversity among the family and personalities. Bilingual edition.

I Love Saturdays y Domingos, Alma Flor Ada. (K – 2).
An portrait of a bilingual girl’s weekend visits to her two sets of grandparents. She does different things in each place and hears different stories reflecting her grandparents’ heritages. Includes phrases in Spanish.

Be Who You Are: Looking at Teasing and Name-calling

A Bad Case of Stripes / Un caso grave de rayas, David Shannon. (K – 2).
Camilla was always worried about what other people thought of her. She contracts an ailment that literally turns her into whatever anyone--classmates, doctors, etc.--decides she should be. English and Spanish editions. 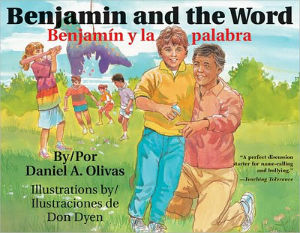 Benjamin beat his friend James while playing handball, and James retaliated by calling Benjamin "the word." A compelling look at name-calling and intolerance. Topics of immigration and race are raised in the book. Bilingual edition.

Chrysanthemum / Crisantemo, Kevin Henkes. (Pre-K – 1).
Chrysanthemum loved her name until she started school and the others laughed at it. English and Spanish editions.

Dear Mr. Henshaw / Querido Sr. Henshaw, Beverly Cleary. (2 – 5).
It's not easy being the new kid in town, with recently divorced parents, no dog anymore, and a lunch that gets stolen every day. Writing letters, first to the real Mr. Henshaw, and then in a diary to a pretend Mr. Henshaw, may be just what he needs.  English and Spanish editions.

I Am René, The Boy / Yo soy René, el niño, René Colato Laínez. (K – 2).
One morning as young René’s teacher is calling role, another student answers to his name and it’s a girl! That afternoon his classmates tease him about his name. Bilingual edition.

Me gusta ser como soy, Todd Parr. (Pre-K – 1).
Stella loves being the center of attention, but when she realizes her colorful ears and different from her friends, she tries to keep it a secret. She's afraid they won't like her anymore. Will Stella ever learn to love her special ears? Spanish edition. 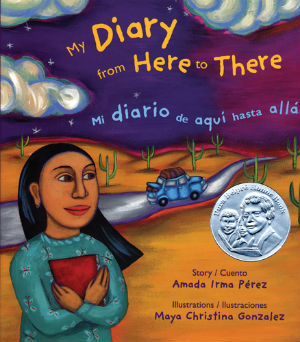 My Diary From Here to There / Mi diario de aqui hasta alla, Amada Irma Perez. (1 – 3).
Told through the eyes and feelings of a child, the narrative successfully telescopes the family odyssey. In her first diary entry, Amada is anxious about her family's move from Juarez, Mexico, to Los Angeles.

My Name Is Maria Isabel / Me llamo María Isabel, Alma Flor Ada. (1 – 3).
For María Isabel Salazar López, the hardest thing about being the new girl in school is that the teacher doesn't call her by her real name. "Why don't we call you Mary instead?" Can she find a way to make her teacher see that if she loses her name, she's lost the most important part of herself? English and Spanish editions.

The Story of Ferdinand / El cuento de Ferdinando, Munro Leaf. (Pre-K – 1).
A timeless classic first published in 1936. All the other bulls run and jump and butt their heads together, but Ferdinand would rather sit and smell the flowers. English and Spanish editions.

Wonder / La lección de August, R.J. Palacio. (5 – 7).
Auggie was born with a facial deformity that prevented him from going to a mainstream school until 5th grade. Told from multiple perspectives that highlight different struggles with empathy and acceptance. English and Spanish editions.

Call Me Tree / Llamame arbol, Maya Christina Gonzalez. (PreK – 2)
A lyrical story about belonging, connecting with nature, and becoming your fullest self. Inspires readers to dream and reach and to be as free and unique as trees. Tree’s gender is purposely not named so that all can relate to the story and discussions can be had.

Drum, Chavi, Drum! / ¡Toca, Chavi, toca! Mayra L. Dole (K – 1). Plucky Chavi is determined to play the drums on the school float during Miami’s Calle Ocho parade. The only problem is that everyone is convinced that because she is a girl, she cannot possibly be good enough. Chavi knows differently.

Hay algo mas aburrido que ser una princesa rosa? Raquel Díaz Reguera. (Pre-K – 2).
Carlota is a princess, but she’s tired of the color pink and does not want to kiss any more frogs to see if they are actually princes. Why shouldn’t she be able to rescue princes from the claws of wolves, slay dragons, and fly in hot air balloons? Spanish edition. 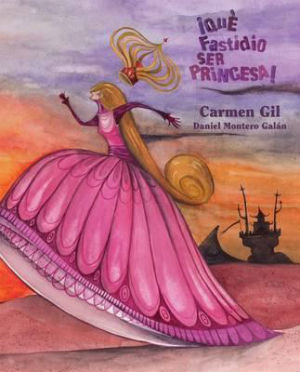 When Princess Nona has simply had enough of being a princess, she leaves her parents’ palace and takes her destiny into her own hands. Written in verse emphasizing the importance of being oneself and having the courage to follow one’s dreams. English and Spanish editions.

Tia Isa Wants A Car / Tia Isa quiere un carro, Meg Medina. (Pre-K – 1).
A car means freedom to Tia Isa, but saving the money to buy one seems ridiculous to Tio Andrés. She and her resourceful niece set out to prove him wrong. English and Spanish editions.

One of a Kind, Like Me / Unico Como Yo. Laurin Mayeno. (Pre-K – 1)
Tomorrow is the school parade, and Danny knows exactly what he will be: a princess. A sweet story about unconditional love and the beauty of individuality.

Biographies and Books based on Historical Events or People

The Art Lesson / La clase de dibujo, Tomie dePaola. (Pre-K – 1).
How the wise art teacher finds a way to give Tommy the freedom to create and stay within the "rules" makes a perceptive picture book about growing up and keeping one's individuality. English and Spanish editions.

Baseball Saved Us / El béisbol nos salvó, Ken Mochizuki. (1 – 4).
During World War II, a young Japanese-American boy and his family are sent to an internment camp. Father and son pull the camp together to build a baseball diamond and form a league. English and Spanish editions.

The Dreamer / El soñador, Pam Munoz Ryan. (3 – 6).
Enter the creative, sensitive mind of Pablo Neruda. Meshes factual details with the story of a shy Chilean boy whose spirit develops and thrives despite his father's relentless negativity. English and Spanish editions.

The House on Mango Street / La casa en Mango Street, Sandra Cisneros. (3 and up).
Told in a series of vignettes – sometimes heartbreaking, sometimes joyous. The story of a young Latina girl growing up in Chicago, inventing for herself who and what she will become. English and Spanish editions.

Just Behave, Pablo Picasso! / Comportate, Pablo Picasso! Jonah Winter. (K – 2).
Some people hated Picasso’s paintings. But he didn't listen and kept on working the way he wanted to work, until he created something so different... that people didn't know what to say. English and Spanish editions.

Of Thee I Sing: A Letter to My Daughters / A ti te Canto: Una carta para mis hijas, Barack Obama. (1– 4).
In a letter to his daughters, President Obama has written a moving tribute to thirteen groundbreaking Americans and the ideals that have shaped our nation. English and Spanish editions. 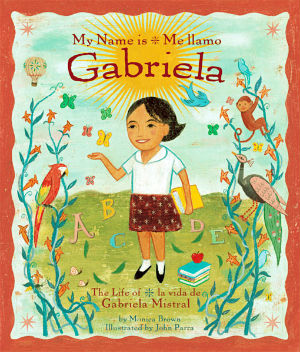 My Name is Celia/Me llamo Celia: The Life of Celia Cruz/la vida de Celia Cruz, Monica Brown. (K – 2)
A well-known singer in her homeland of Cuba, Celia moves to New York City and Miami where she and others create a new type of music called salsa.

My Name is Gabriela / Me llamo Gabriela: The Life of Gabriela Mistral / La vida de Gabriela Mistral, Monica Brown. (K – 2).
Born in Chile, she would grow to become the first Nobel Prize-winning Latina woman in the world. As a poet and a teacher, she inspired children across many countries to let their voices be heard. Bilingual edition.

Side by Side/Lado a lado: The Story of Dolores Huerta and Cesar Chavez / La historia de Dolores Huerta y César Chávez, Monica Brown. (1 – 4).
Every day, farmworkers harvested tons of food for others. But at the end of the day, when the workers sat down to eat, there were only beans on their own tables. Together Huerta and Chavez motivated workers to fight for their rights and, in the process, changed history. Bilingual edition.

Sonia Sototmayor: A Judge Grows in the Bronx / La juez que creció en el Bronx, Jonah Winter. (K – 3).
Justice Sotomayor didn't have a lot growing up, but she had what she needed -- her mother's love, a will to learn, and her own determination. Bilingual edition.

Tomas and the Library Lady / Tomás y la señora de la biblioteca, Pat Mora. (K – 2).
Based on the true story of the Mexican-American author and educator Tomás Rivera, a child of migrant workers who went on to become the first minority Chancellor in the University of California system. English and Spanish editions.

Viva Frida, Yuyi Morales. (K – 2)
Frida Kahlo, one of the world's most famous and unusual artists is revered around the world. Her life was filled with laughter, love, and tragedy, all of which influenced what she painted. Bilingual edition.